Giving Back to a Tim McGraw Superfan 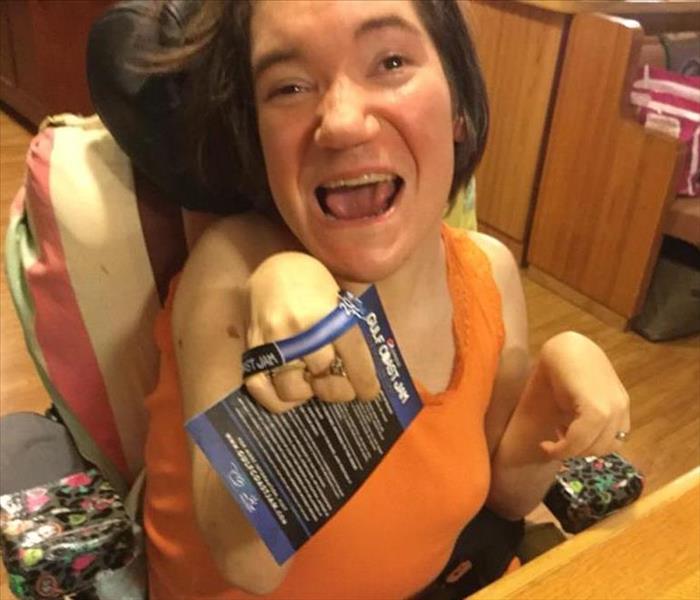 Nikki when she found out she won tickets to Pepsi's Gulf Coast Jam to see Tim McGraw!

SERVPRO of Bay County is always trying to give back to our community in different ways! So, we wanted to share this story with you that absolutely touched our hearts.

We are a proud sponsor of the Veterans and First Responders luncheon. During the luncheon our Marketing Manager, Talena, gave away Gulf Coast Jam tickets as door prizes. The first winner was in tears when she was given the envelope. Talena asked, “Are you excited?” and she replied, “You have no idea, we have an adult daughter that is paraplegic and wants to see Tim McGraw, and we just can’t afford tickets this year.”

After the luncheon, the Mom called Talena to claim her prize. Talena and the Mom went on to talk about her daughter, Nikki who is 27 years old, born with Cerebral Palsy, and has been in a wheelchair her entire life. Nikki is a major Tim McGraw fan and her obsession started at age seven when she first heard the song, “Don’t Take the Girl.”

At the time, Nikki was away at camp so Nikki was not going to learn about the Gulf Coast Jam tickets until the next Friday. “Make sure you are listening as we are sure we will hear her scream all the way from Altha!” said Mom. She then asked if we were selling tickets and Talena explained our sponsorship opportunity and asked if she needed more tickets. She replied, “Yes, one, because it takes two people to handle her and her wheelchair.”

Without hesitation, Talena told her SERVPRO of Bay County has her third ticket covered.